We are the embodiment of Ubuntu 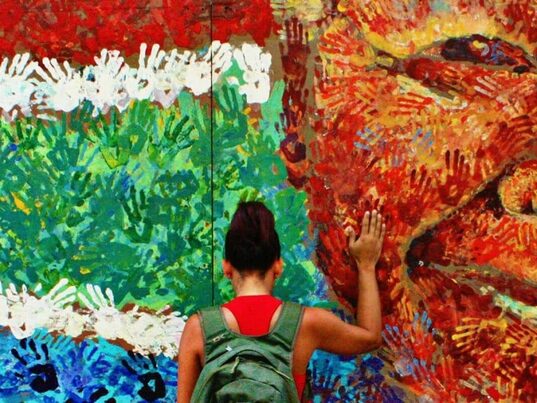 Ubuntu (Zulu pronunciation: [ùɓúntʼù]) is a Nguni Bantu term meaning "humanity." It is often translated as "I am because we are," or "humanity towards others," but is often used in a more philosophical sense to mean "the belief in a universal bond of sharing that connects all humanity."

In the words of Michael Oynebuchi Eze:
The lesson of Ubuntu ...(happens when)... we find our shared humanity in the encounter with others. The masks of fear, suspicion, and strangeness are removed and the gifts become visible. Ubuntu does not ask that we erase differences and become the same. It asks that we interpret others positively, recognizing that whatever our differences, our humanity is equal. It is an invitation to dialogue, to understanding, even without agreement, and with understanding comes compassion, tolerance, nobility, sharing. Sharing is divinity, just as food is divinity in African culture. Ubuntu tells us: Go and share food with the person you don’t like. Something will shift. In dialogue you need not come to agreement, but you will come to understanding.

Language is a window on culture, and in many African languages the word for a human being is closely related to the word ubuntu, or botho. The concept of ubuntu is bound up with the very idea of what it is to be human. Many African proverbs are also expressions of ubuntu.
“Umntu Ngumntu Ngabantu” or “I am, because you are” is how we describe the meaning of Ubuntu. It speaks to the fact that we are all connected and that one can only grow and progress through the growth and progression of others.
Ubuntu has since been used as a reminder for society on how we should be treating all living beings.